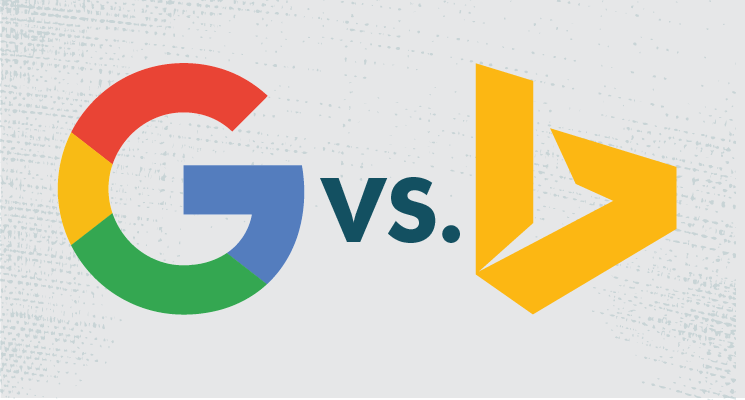 Feeling a little anti Google lately? It’s hard not to considering how pervasive Google has become in our society. In fact, the phrase, “anti Google” is searched approximately 880 times a month (funnily enough, on Google). These “anti Googlers” feel that they’ve put too much trust and faith in Google and are interested in finding alternatives.

Google’s former CEO Eric Schmidt famously said, in defense of monopolistic claims levied against the company, that Google’s competition is “one click away” for searchers. So, I decided make that click away and ditch Google in favor of Bing for a few weeks. I wanted to see if I could get all of the things that I normally do in Google done in Bing. Now, after living with Bing for a little while, here’s my take on how it compares to Google.

Let’s Bing it On! 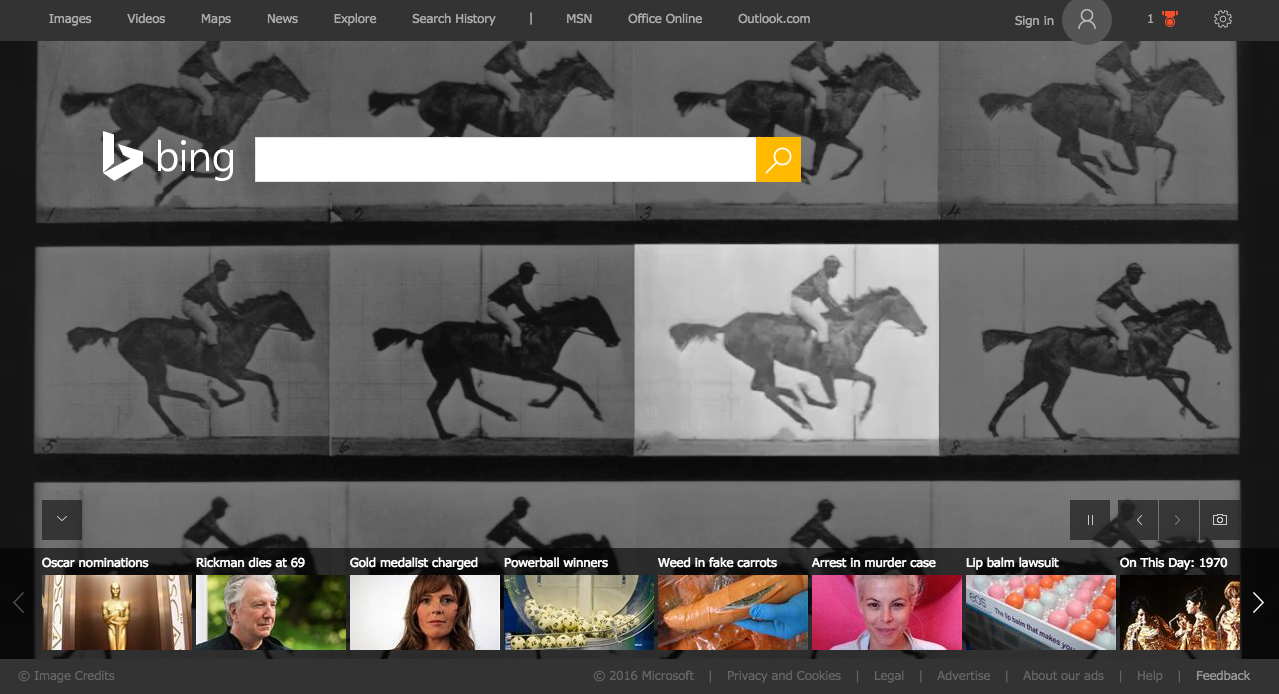 One of Bing’s biggest differentiators from Google is its homepage. The Bing homepage offers a lot of trending searches, which are mainly centered around celebrity news.

I find Bing’s homepage to be very busy. While this may provide something sticky for searchers (especially if you like following celebrities), I find it to be very distracting. I go to a search engine to find something specific, not to be sidetracked by what Kanye West or Kim Kardashian is up to right now. Even on mobile, trending searches pop up when you select the search box. I know it’s purely preference, but I prefer Google’s classic, mostly blank homepage and focus around searches that you want to do. 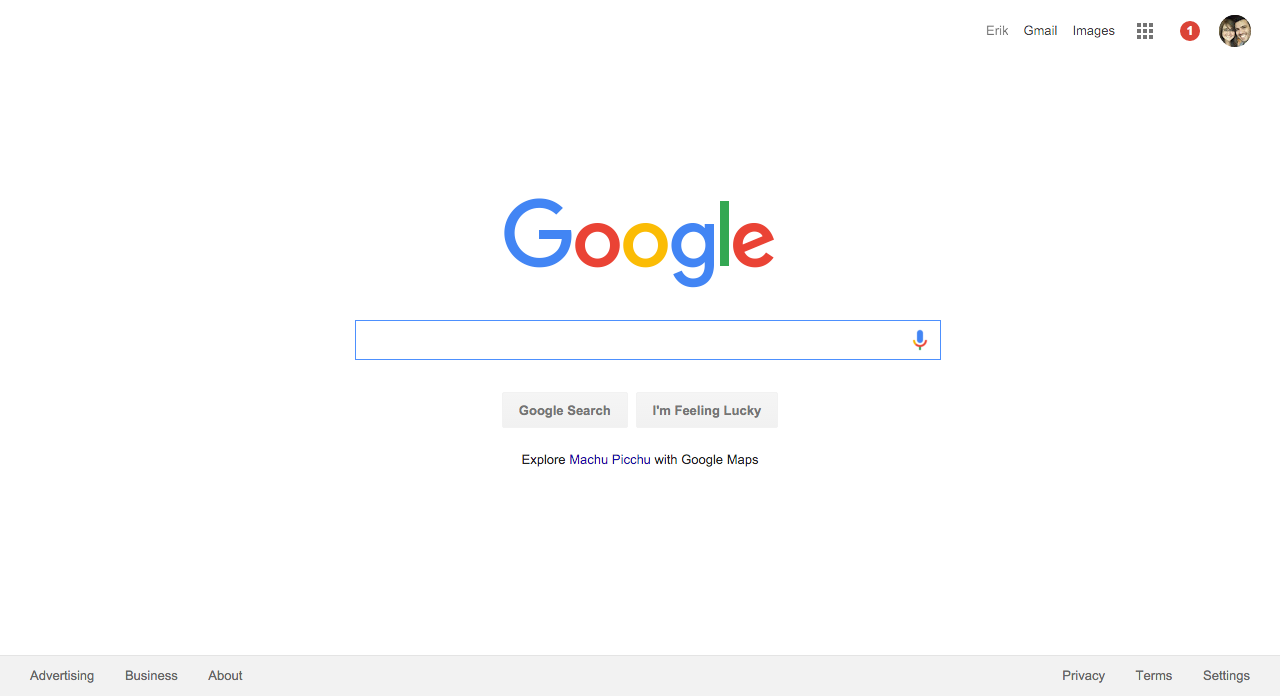 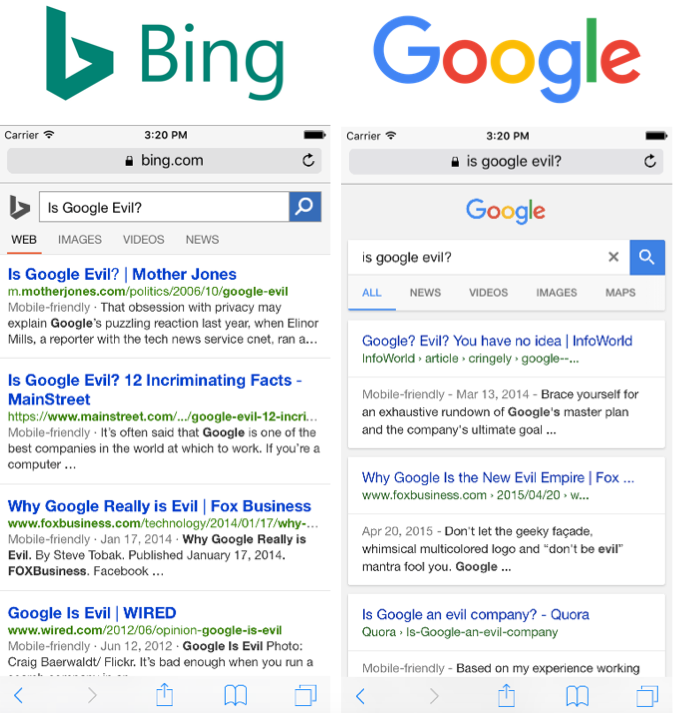 As far as search results go, the text is much easier to read on Bing than on Google. The particular shade of blue and the bold facing is so much more user friendly. I also like that the distance between text is smaller, allowing for more results to display on the screen.

One of my favorite features in Google has always been changing the timeframe of results through the Any Time feature. You can get to this by scrolling right on the bar that has the News, Videos, Images, and Maps options. 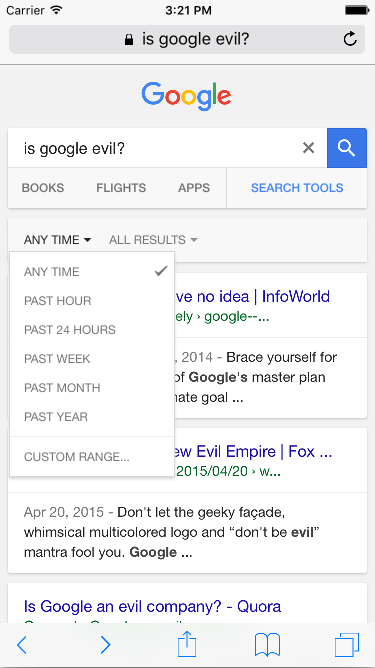 This feature is particularly useful if, say, you want to see if a software patch has been published online in the last month, nor read a forum article about a patch done in 2007. Bing fails in this regard and does not offer a similar function. I know this this a really expert-level user functionality for a search engine, but it is one of my most frequently used features when searching online.

Technical searches are really good in Bing. I was quite happy with searches for specific drivers and firmware. In my testing, a comparison search for “NetGear N600 Wireless Dual Band Router firmware” gave me similar results.

Local searches on Bing were also pretty comparable to Google results. I never had much trouble finding what I was looking for.

The problem that arose with Bing was the inconsistent quality of results. The searches that were really poor seemed to focus around news sites. There seemed to be an uneven weight towards unknown sites or sites that don’t have anything to do with a particular topic or industry within the results.

Looking closely at the results for “Is Google Evil?,” you will see the Mother Jones and Mainstreet.com results on Bing. These are two sites that aren’t known for technology journalism but are still ranking higher than a site like Wired, which focuses on consumer electronics and technology news. Google’s first result, InfoWorld, is centered around technology journalism, so it makes sense why that result is there.

The difference between Bing and Google’s results is that Google’s just make sense. Google’s algorithm is sophisticated enough that, in most cases, the most relevant thing shows up at the top. Bing’s quality is so scattered that I found myself typing in “Google.com” when I had gotten frustrated with the results. I would go three (and even four) results pages into a Bing search, only to give up. I would then do the same search in Google and find exactly what I was looking for on the first page.

I was hoping to find an alternative to Google in Bing, but I found it to be very frustrating. The quality of Bing’s results almost paralyzed me and gave me anxiety when I was trying to find something quickly online. I’ll keep looking for the anti-Google search engine, but for now I’ll stick with the old standby.