How to Shoot Professional Videos on an iPhone 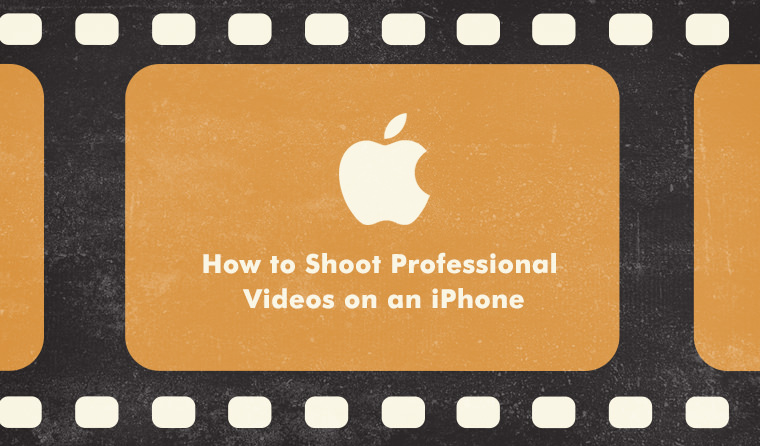 Love it or hate it, the iPhone started a revolution. One of the advances that the iPhone brought was high-quality photography and videography. Recording equipment has always been very expensive and less than user friendly. However, the iPhone has made high-quality, professional video content more cost effective for small businesses. Now, the latest iPhone has 4K video capabilities and provides decent audio recording quality. With this video recording device sitting right in your pocket, the question arises, “Can business owners record a professional video from their iPhone?” I believe that the answer is yes, and I am going to show you how to create video content for your business all by yourself!

This is the thing that will trip up even seasoned videographers. It is critical for any video production to have a plan outlining its purpose and messaging. Countless times throughout my career, I have had conversations with business owners during which I’d ask them how long of a video they were looking to make. They would say “about three or four minutes,” but as we started going through the planning process, we would find that their video would actually run about 18 to 20 minutes. In my experience, I have found that video for small businesses, especially video that is destined for the web, should be no longer than three minutes. According to YouTube, most drop offs happen within the first 15 seconds of the video. This is why the opening needs to be compelling, attention grabbing, and build a firm foundation for your video’s messaging.

A good rule of thumb for creating a video with a succinct message is to abide by Aristotle’s advice for giving a good speech: “Tell them what you are going to tell them, tell them, then tell them what you told.” Looking at a two-minute video, your first 15 to 20 seconds should sum up what you are going to tell viewers. The next minute or so should be you telling them what you want to tell, and the final 15 to 20 seconds is reminding them about what you just told them. You can also use this time to give a call to action.

Take a look at this Apple video and pay attention to its length. You should also note that they are only talking about one thing—Apple Pay. There are several features on the iPhone, but they chose to explain only one in detail with a single video. Follow their approach. If you want to highlight other products or services, make more videos!

At first, I didn’t see much value in recording video in 4K until I listened to a documentary from sportscasters talking about their use of 4K cameras. 4K cameras are used to record a wider space, and they allow the post-production team to zoom in the video to 1080P quality. This allows them to get a more detailed shot, and it also allows you to frame your shot properly. It’s important to note, though, that 4K video takes up a lot of storage on your iPhone. In my testing, I found that three minutes of 4K video on the iPhone 6s Plus is approximately 1.8 GB. This is another reason why having a plan is important. You may not have enough space to record everything if you don’t plan correctly!

Bad audio is one of the key things that makes video content seem amateur. My recommendation is to make sure you record in the quietest, least-echoey location possible. One thing I do is record voices separately from a device that is as close to the person as possible. I place the iPhone farther away to capture the video recording. Be sure to have the speaker clap their hands at the beginning of each recording. This will allow you to sync up the audio when editing.

Make Your Own Music!

One of my favorite apps for video creation is Garageband for iOS and Mac. I’m shocked at how many people pay for royalty-free music when you can simply create your own unique song yourself. I think that the misconception is that you can’t use Garageband music for commercial purposes, which is not true. Apple clearly says on its website, “so don’t worry, you can make commercial music with GarageBand.”

Build Off of Professional Graphics

While there are a lot of tools that allow you to quickly make video graphics, my recommendation is to work with a graphic designer that can make some simple motion graphics. An opening graphic allows you have something that fits well with your existing branding and provides consistency throughout all of your videos.

Don’t Edit on Your iPhone

In preparing for this post, I tried to edit the video on an iPhone, and I found that it’s just too limiting. A lot of the tools available on the iPhone are very feature limited, especially Apple’s own iMovie app. Zooming in a 4K video is not possible on iMovie for iPhone, but it is possible on the Mac version. There are also more philosophical reasons not to edit on your iPhone. It’s good to see the video on a bigger screen and to make more precise edits. On a phone, it’s hard to see if a video is blurry or if the color is off. Sometimes the only way to see issues with what you shot is to see it on a big screen.

In the wise (or not so wise) words of George Lucas, when you shoot something, try a “faster, more intense” take than you did before. Lucas said this to keep the original Star Wars cast from appearing rigid while saying ridiculous lines, but I think it applies to shooting videos for your business as well. Keep pushing the boundaries and trying new things, and you may surprise yourself.