Type Foundry of the Month: Bauertypes 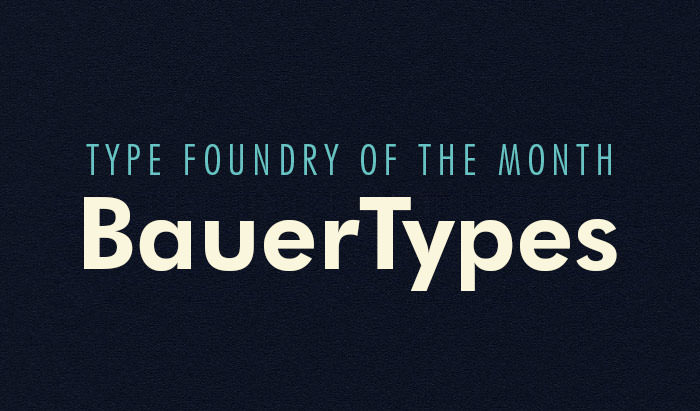 It’s been a while since we’ve talked about type, but we’re excited to be picking back up our Type Foundry of the Month series. This month we’re showcasing Bauertypes.

Some Background on Bauer

Primarily known for its geometric san-serif font, Futura, the Bauer design office was founded in Frankfurt, Germany in 1837. The foundry itself has withstood several takeovers and a collapsing market, having opened an office in New York City right before the Great Depression.

On Moon and Screen

Created by German type designer Paul Renner in 1927, the Futura font family was inspired by the Bauhaus movement which focused on melding manufacturing and art.

Futura has become one of the most recognizable san-serif faces on the planet. Its wide range of classic styles means it has been used on cars, trains, and has even been in space – twice, really.

In 1969, Futura landed on the moon in a plaque marking Neil Armstrong’s historic first steps. The font then appeared on screen in Stanley Kubrick’s film 2001: A Space Odyssey. If you have time, the series Kubrick in Futura cleverly recreates the filmmaker’s movie posters as a commentary on the artist’s love of the font.

A Look into Futura

Obviously, Futura is Bauertypes’ superstar. Let’s explore some of my favorite treatments and uses of this design staple.

(Special thanks to Myfonts.com for these images.)

If you’re a comic book nerd like me, you’ve probably seen Futura Medium in all caps during the scene changes of Captain America: Civil War. Marvel Comics is known for providing commentary on modern thought through its characters, and the font’s futuristic design mirrors these superhuman themes.

Futura ND Black is a play on elementary construction using shapes – the letters resemble building blocks. The “O” is a half circle, while the “K” is a rectangle stacked beside triangles. The slight spacing between shapes creates a 3D effect that pops off the page.

The Face Only a Mother Could Love?

Futura has become so commonplace in advertising that in the 90s it garnered some backlash from the design community. The Art Directors Against Futura Extra Bold Condensed’s sole mission was to discourage the use of “the mother of all typefaces.”

Funnily enough, though, Futura’s popularity still hasn’t waned. Brands like Volkswagen, Red Bull, and Best Buy gravitate toward its design. The contemporary lines and even spacing create timelessly modern looks, while its striking shapes and rounded edges have kept the type fresh. To the disapproval of some, it seems like Bauertypes will continue making its mark on marketing for a while.